One of the great things about baseball is the "non linearity" of it.  Like seasons - of the year or of your life - there are cycles.  This picture shows a circuit coming complete. 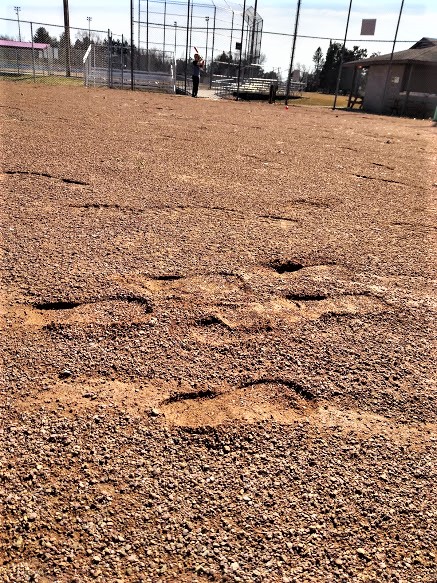 Baseball on a delightfully warm day in March.  This is the field my son played on starting at age 9.  There are a lot of great memories there.  And some other ones too, I was after all the coach of the team.  But mostly it was great.  Today for the first time it was three generations of us out there.  Myself, my son, my grandson.

He has considerable talent, especially as a left handed hitter.  He'd routinely smack it over my head as I played somewhere around first base.  The footprints you see are, in the most straightforward sense, from him sprinting around the bases when he got ahold of a pitch and sent it to the outfield grass.

I think my dad came over to watch a game or two when my son was not much bigger than this.  So in a sense we have at least the ghosts of four generations here.

My dad was a good physician and, given the difficulties of his times, a good father.  He could neither play nor coach baseball.  Growing up on a farm there was no time for such foolishness.

I may have been a slightly better physician and dad.  No disrespect intended, I simply am a more determined individual, and one of the things I was good at was dividing my energy into work and family categories...and throwing all I had into them.  I was a lousy ball player and only a fair coach.  I have a bad throwing arm, but am a darn good judge of talent.  So I lack some abilities but I always get the most out of my teams.

My son is probably a better dad than I was.  He was/is also a much superior ballplayer.  Focus, coordination and an early growth spurt will do that.  I've not seen him coach, but based on his years as a camp counselor I project him to be outstanding.  And remember, I am a good judge of talent.

And the Kid?  As a ballplayer he is way better at this age than any prior generation. If he keeps up the interest he will be outstanding.  Little League isn't ready for him.  I suppose there's no point in speculating further, but I also think he has the makings of being an excellent human in all respects.  You raise 'em right, or more plausibly you give it your best shot, and that's what you hope for.