The Great Pyramid of Wisconsin

When I'm off on a Road Trip it's usually not the known destinations that make them fun...it's the accidental finds.  Sometimes it can be a complete enigma.  Other times I see something from afar and have it pegged right away.  As I drove near Horicon Wisconsin I saw this along the side of the road and said "Classic Supper Club.  Fallen on Hard Times".  And so it was.  And so it has. 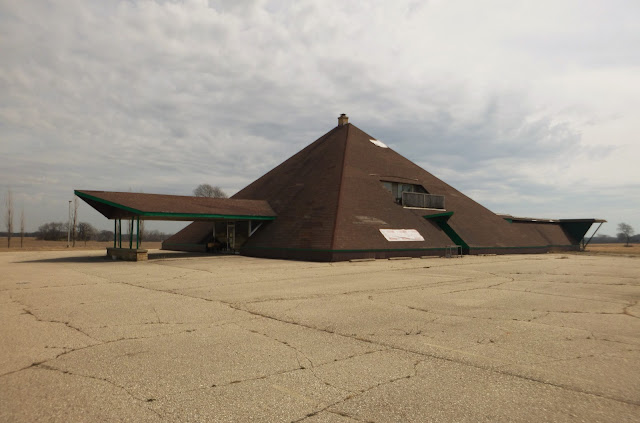 I've actually been to, and inside, the Great Pyramids.  And this was fairly evocative.  The dry, cracked parking lot all around this impressive structure is on a smaller scale reminiscent of the desert sands that come almost up to the doorsteps of the Pyramids and Sphynx at Giza.  And that same pervasive sense of a Lost Era is hanging in the air.
The history of this place of course is more modern.  Let's hunt up some clues... 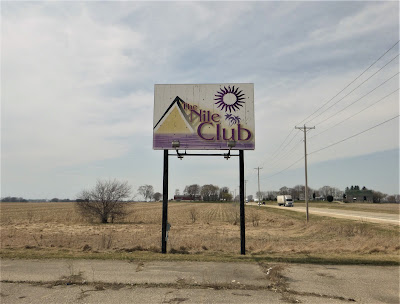 The Nile Club.  That's not its current incarnation.  And you'll have to take on faith that this was not how I made my ID of the site.  And speaking of Faith, here we have an American flag and a humble signboard with a Bible verse. 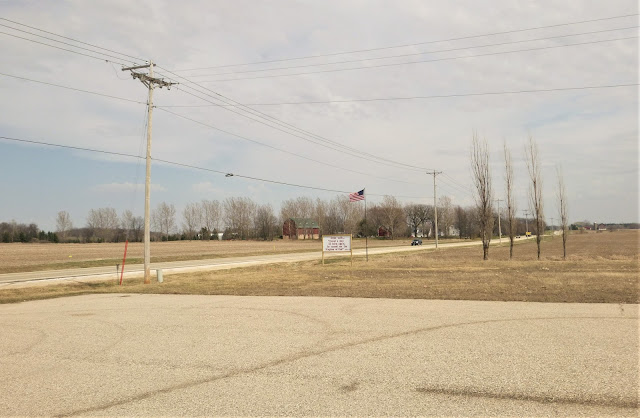 The place seemed to be semi abandoned.  There was a car parked out back; perhaps somebody lives there.  But the roof is in sore need of repair and the general sense of decay is palpable.  The front door looks to be long unused.  But as is often the case with grand edifices in decline, a smaller more manageable portal is kept functioning.  My photo was intended to just show the signage but includes my own image as an apparition from some alternate Mirror Universe. 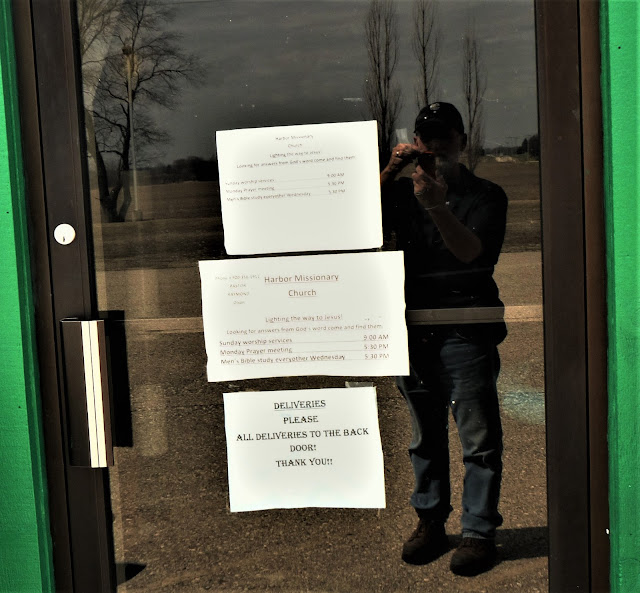 I can't find a presence of the Harbor Missionary Church on Facebook or a functional website.
The story of this supper club can be found in this Roadside America entry.  It's the usual tale.  Somebody had an idea for a supper club.  They hit on a theme that was current at the time and built it up into what sounds like a great business.  Supper Clubs were, and to a lesser extent still are, an important part of Wisconsin culture.  Friday night fish fries, potent brandy old fashioneds mixed by bartenders wearing ties and often red vests.  Conversation and laughter just a bit louder than you'd find in more straight laced parts of the country.  This is a world not yet entirely gone, but one that is receding into the past.  Of course images survive.  Let's look at a few before they become as puzzling as the delicate paintings on the walls at Giza. 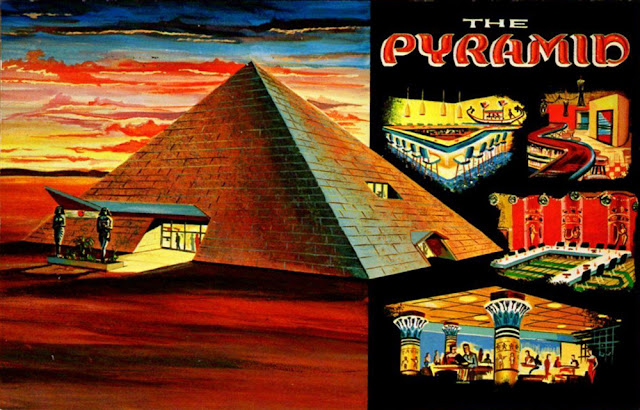 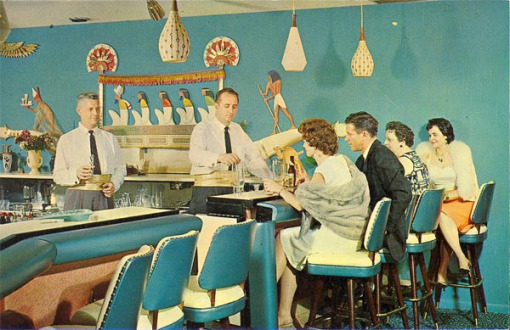 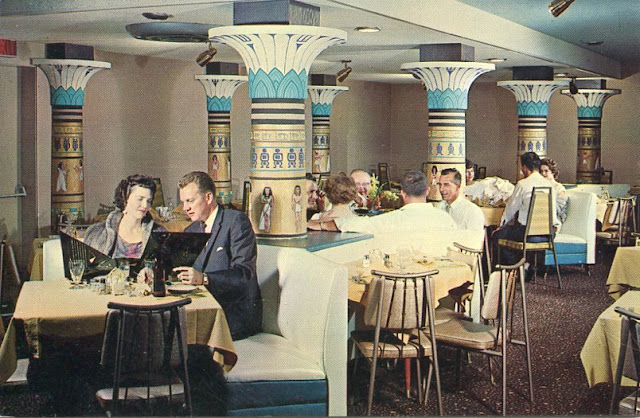 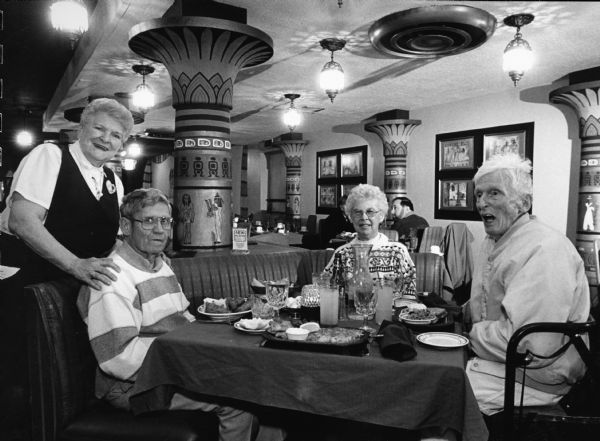 Detritus of Empire.  The phrase does not apply only to antiquity.

A couple of years back I posted on an unusual variant of "Tree Shaped Tombstones" that I'd encountered in the area of Beaver Dam Wisconsin.  And so far nowhere else.  Obviously when I'm over that way I keep an extra sharp eye out, and even route through more of the small, off the beaten track communities that are numerous in eastern Wisconsin.  Such as...Randolph.  This is a nice little village of 1,800 current inhabitants and of course has an area on the edge of town for former ones.... 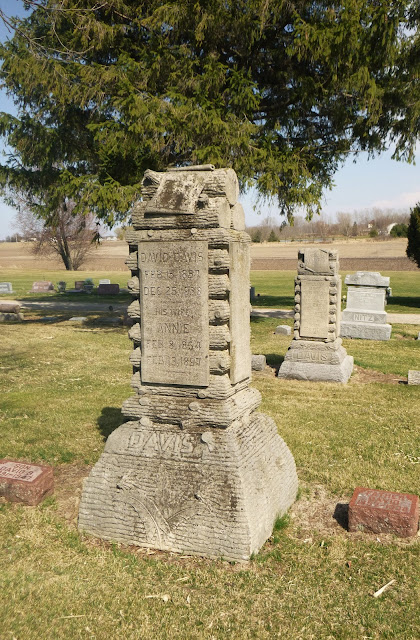 Here's two of the "Beaver Dam" style tombstones, one in front of the other.  They are from two individuals with the name of Davis. 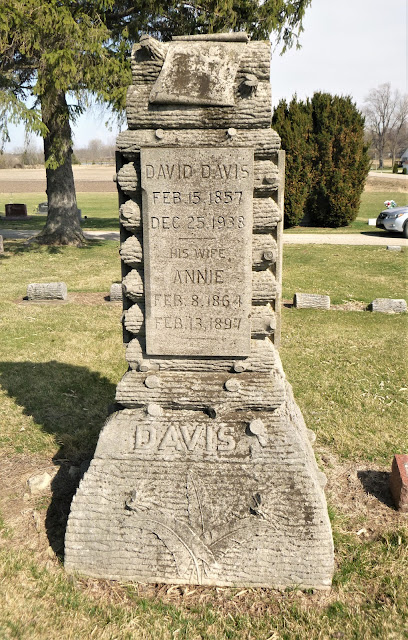 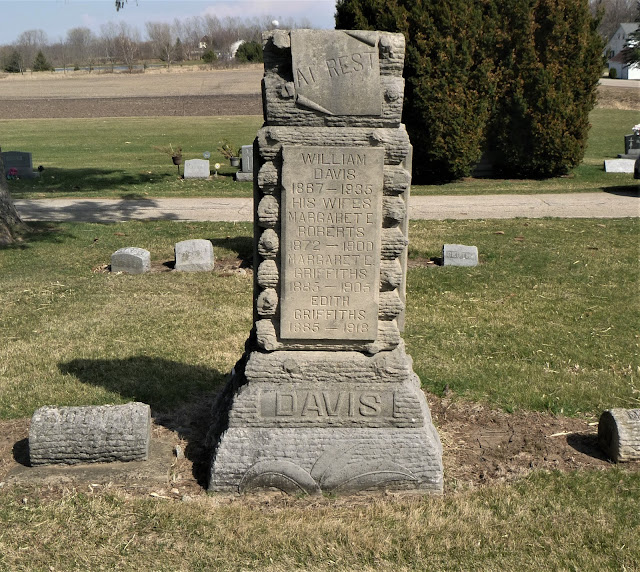 And William Davis, born 1887.  Presumably two generations then?   It's a bit unusual to have His Wife be 15 years older.  And were Edith and Margaret siblings of William?  Tucked back behind is another small, tragic mystery. 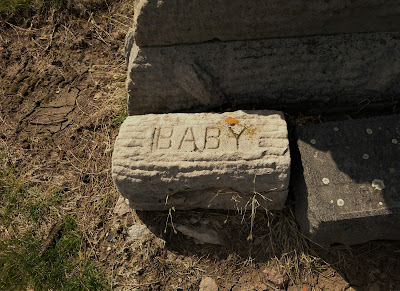 Infant mortality was so common back then.  Were some children who lived only a short time not even named?  Some tragedies of course were impossible to minimize in this fashion.  Elsewhere in the cemetery... 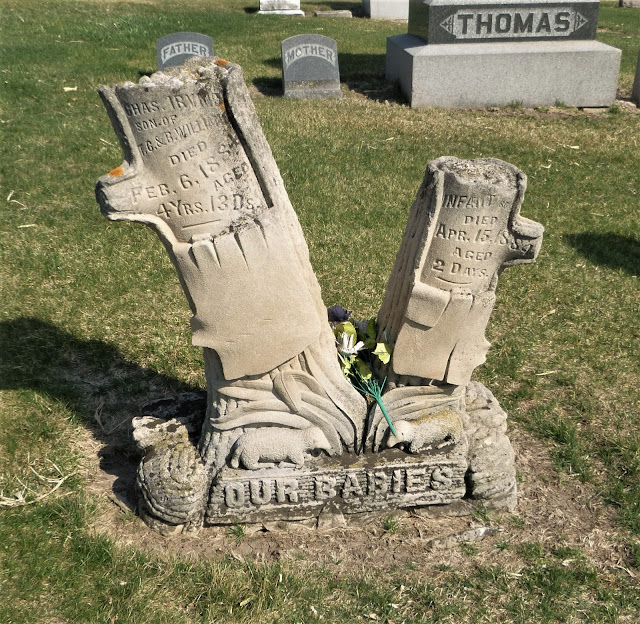 Our babies.  Two deaths in the spring of 1884.  Age 2 days and age 4 years.  Very unusually with a memorial over a century old, there are still flowers, albeit plastic ones, being placed on it. 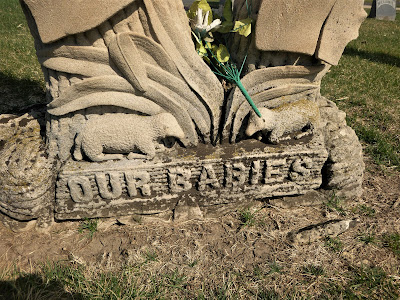 Out for a walk the other day.  Hey, what's that back behind the dumpster?  It was on a lot where there had been a fire a few weeks ago.  Let's take a closer look.... 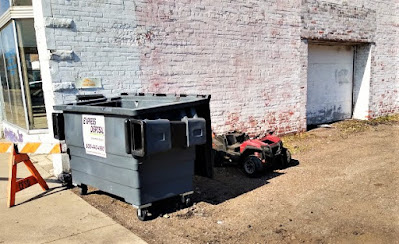 A crispy, partially melted Barbie Jeep.  Man, there was a time when I'd have grabbed this and hauled it home.  There's motors, gearboxes, wiring and switches to scavenge! 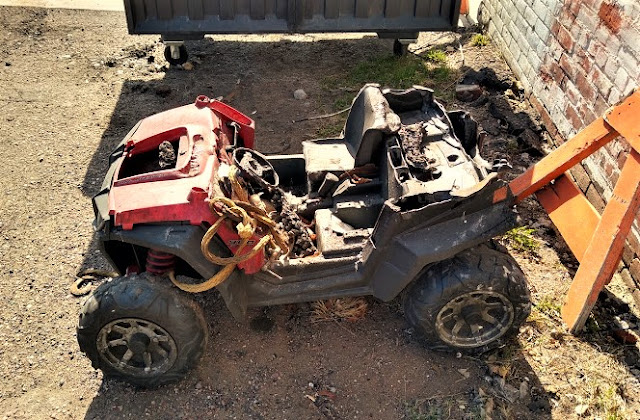 But that was in an earlier, simpler time.  Back then I needed a constant supply of parts for Machines Behaving Badly and for other DIY robotics projects.  Now things are more precise, more organized.  Actual....engineering.  Most of the scavenged robot parts from years past have gone to recycling.
Times are different.  Even I'm different but no so much changed that I don't feel the nostalgic tug of the old ways.  It brought to mind a song I had not thought of in years.

Historian, raconteur and my good friend Pete Savin recently posted one of his videos on the ruins of Aescica, a fort along Hadrian's Wall.  Good stuff, and a reminder of green fields that are for this year out of reach for me.

It features prominently a landmark that I've been to myself, a Roman altar still standing in the middle of the ruins.  Oh, it is in tough condition, only vague shapes and no text have survived.  And to be perfectly honest it spent long centuries in the "horizontal and nibbled on by moles" status, presumably being put upright again after excavations in 1894.  But today it stands free, and as in Ancient Times passersby leave coins on it as votive offerings. 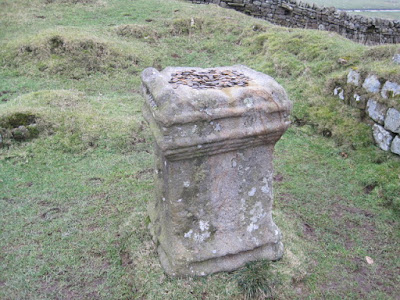 It's a picture that would make sense to a person nearly 2000 years ago....and to one today.  But for how much longer?   For roughly 80 or 90 generations people could in theory walk up to this, place a coin atop it for good fortune and walk on.  How many generations before  this no longer makes sense to people?
Commerce has changed.  After barter became inefficient coins were the sole medium of exchange. Paper bills supplemented it for a relatively short time, then we began pushing around little rectangles of plastic.  And now?  You can wave a "device" to transfer wealth.  And if a person from ancient times had difficulty understanding the concept of Bitcoin I at least would be in sympathy with their incomprehension.
How do we journey through this world?  On foot, in our silent electric chariots?  Or whizzing by virtually on our way to somewhere else?  What moments, if any, of reflection do we have along the way?  What powers beyond our ken do we propitiate, and what is the nature of our votive offerings?
Not long now until another virtual Jet Lag Drinks hour.  And some of these questions are too ponderous and frankly too crabby even to consider over pints as we sit magically in our own domiciles and Mercury, swift messenger of the gods, sends our voices and images instantly across seas and far horizons.

Email ThisBlogThis!Share to TwitterShare to FacebookShare to Pinterest
Labels: Archeology, The Modern World

There used to be a time when the Fishing Opener was on a specific date.  Now, with more scientific appraisal of fishing, there are certain species, certain bodies of water that are fair game at all different times.  But for Strange Fish - bottom feeders and glorified minnows - it's pretty much "meh, whatever".

So on an early April day it was my first fishing trip of the year.  A warm lazy time to sit on the river bank. 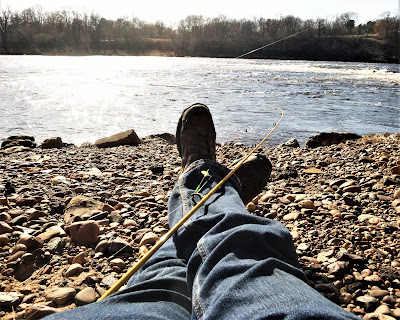 I caught some fish including a couple of these guys.  Alas, it seems to once again be a silver redhorse, a somewhat uncommon species but one that I caught last fall upstream a ways.  So no new species.  Alas. 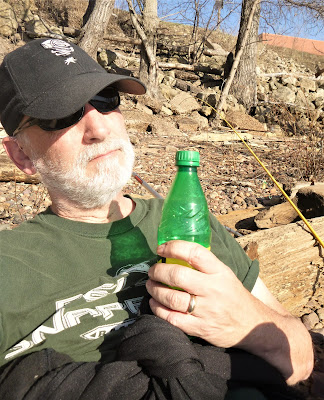 Spring is an excellent time to be hunting for CCC camps.  You don't have to contend with bugs and the underbrush has not grown up yet.  Last week I visited the site of Camp Sawyer.  Obviously this was in Sawyer County, some distance from, well from anywhere but specifically from my starting point of Hayward.

As usual there is a nice sign.  It sure makes finding these things easier. 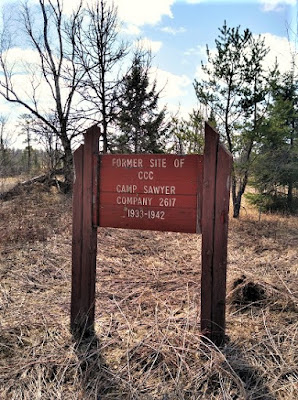 This camp made extensive use of these concrete pillars.  I don't think these were made on site, but rather hauled in.  I guess they had a bunch of them. 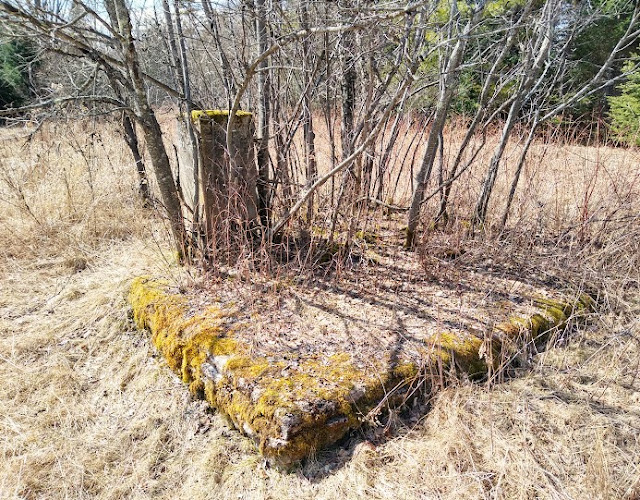 Two taller pillars mark the entrance to the camp.  The one on the right is mostly hidden by trees. 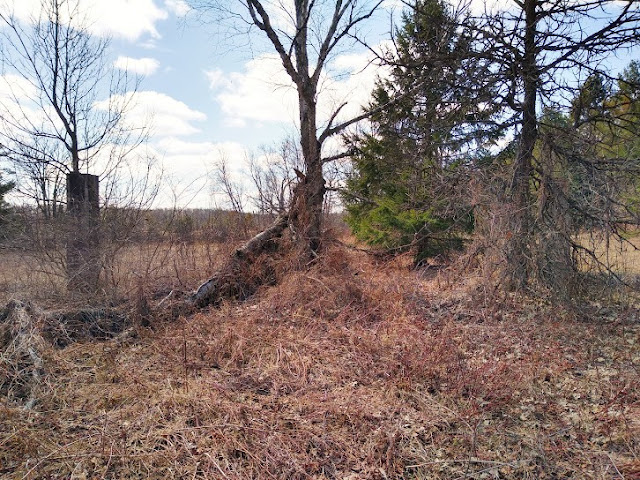 Some distance away are two stone hearths with chimneys.  These are said to be officer's quarters but I am doubtful.  CCC camps tended to be rather egalitarian and to have the officers living in nicer quarters and over across a road would be atypical.  Not impossible of course, this camp was established at the site of a previous logging camp and I'm thinking these were structures left over from that earlier era. 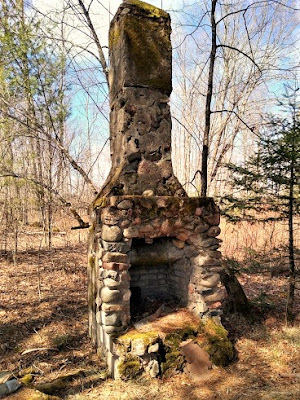 In one of the hearths there was this geocache which I found by accident.  It does not appear on the standard geocache database.  Some sort of bootleg cache?  I signed it anyway. 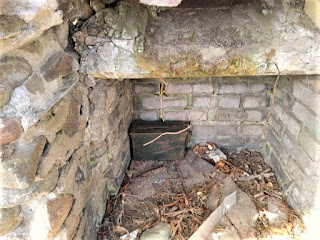 As it happens we actually have a very nice account of this camp circa 1940 and courtesy of a certain Claude L. Pitcher.   Well worth the read.  He makes no mention of these swell looking officer's quarters and indicates that the camp consisted of:
"3 barracks, a mess hall, generator building, Army office, Forresty office, rec building with PX Forrestry Motor Pool, Army motor pool, a fire wood shed, and a latrine with shower."

Spelling errors courtesy of Mr. Pitcher, but I'm not about to take issue with an ex-Marine on such matters.  About all that is clear is a pit that I assume was the latrine and the pillars between which Claude drove his truck out of camp.  This camp did lots of forestry work.  In addition they constructed the Black Lake Lookout Tower a few miles to the east.

There is at least one existing copy of the camp's newsletter.  I'll publish some pictures of same when I get a chance to see it in the archives at UW Eau Claire.  Here's a picture of some of the men and their cooks standing in front of one of the now vanished buildings.  Taken in 1937 it was before Claude's time.

One branch of the extended family is part of a food cooperative.  Pay a small amount per month and every couple of weeks you show up and get a wonderous collection of foodstuffs.  It varies of course, but usually there is some fresh produce, a wide array of items from Mexican food distributors,  and odd ice cream products which are sometimes mislabeled.  And lots more.  You have to watch expiration dates closely, and sometimes the chicken flock benefits more directly than the human members of the family.

And sometimes it just gets weird. 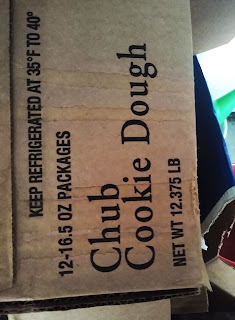 This is the same branch of the family that is heavily into fishing, and in fact is the household where Chub Fest has been held.  So I had to wonder if "Chub Cookie Dough" had some kind of fish base to it!*
Mmmmmm.  Chub Cookies.  Now that's Fine Dining. 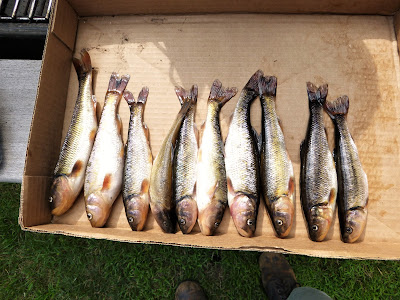