A First for Detritus of Empire....

A recipe.  I usually have no use for "food blogging" on any level.  But I am a practical man, and having gone to considerable efforts last year to take up deer hunting it behooves me to become a proficient venison chef.  And as it is usually for my own consumption no end of experimentation is tolerated.

I guess with food posts it is customary to show the end result first and work backwards.  OK. 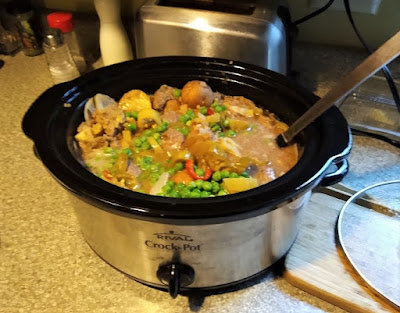 This is my basic crock pot recipe.  All amounts are approximate and every time I make it I try something just a little bit different.  You'll be needing:

Venison.  1.5 pounds seems about right.  Potatoes.  About the same amount.  Any kind works but the red ones seem to cook faster.  One can of creamed corn.  Really.  About a half pound of bacon.  An onion or two.  Carrots if you have some.  And some late cook add ins we'll get to.

First you cube up the venison.  This was a haunch, not even the primo cut.  But as you can see it is high quality lean meat.  And the Cheezits?  Well if you brown the meat first it is just a bit nicer.  I toss it around in a mixture of flour and crushed Cheezits then brown it in olive oil.  I'm not sure the Cheezits add much, but they do give me something to snack on during prep. 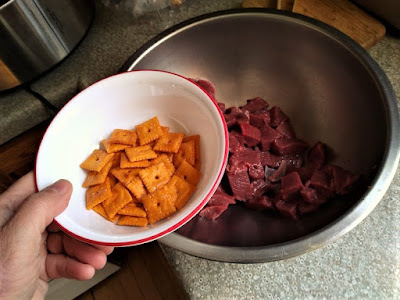 Creamed corn, chopped up onions, chopped up bacon.  And the potatoes.  In this batch I forgot to cut them up small.  Larger chunks add to the cook time. 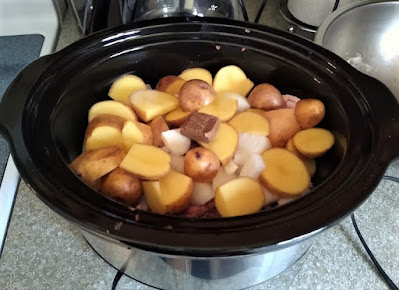 In the crock pot and ready to cook.  The little brown cube on top is not venison, its a bullion cube.  Sometimes I add these, sometimes not.  It does factor in to other additions and seasonings.

It seems to work best to put the crock pot on high for about half an hour then turn it down to low for about 4 hours.  At that point additional ingredients can be added without them turning into cooked down mush.  Here I am dumping in pickled peppers.  One time I poured in some of the associated brine as well.  That got pretty salty. 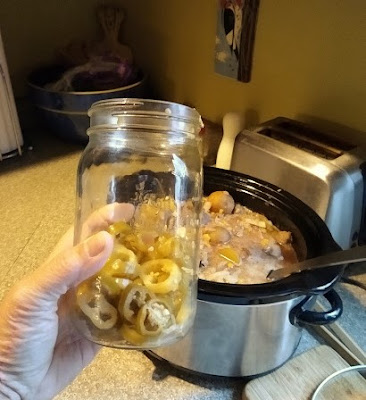 It's also a good time to toss in some frozen peas.  Final cook time is when the potatoes are nice and soft.  Five hours plus, so if I start this at lunch I'm enjoying it for dinner.  And for quite a few meals that follow later.

As to seasonings, the initial source recipe called for a bit of sugar, some seasoned salt and a bunch of Worcestershire sauce.  I've done enough mods to the recipe that I'm not sure they are all needed, but taste a small bit of meat at the end of the cook.  I usually decide at that point to add a bit of salt and a liberal baptism of Worcestershire.  If I'm enjoying reheated leftovers for a few days I'll sometimes spice them up with various hot sauces.

Email ThisBlogThis!Share to TwitterShare to FacebookShare to Pinterest
Labels: Hunter-Gatherer