An Insult for the Ages

It was my second to the last day of excavating at Vindolanda.  The area I was working on was not very interesting so when a bit of excitement was evident over on the other side of a ruined wall I strolled over for a look.  And this is what had been found. 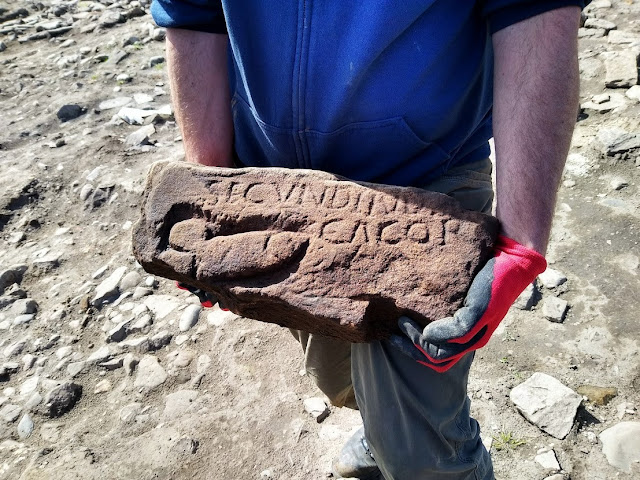 I've had to be quiet about this until now.  There is a policy that when something really interesting comes up the Trust that runs the site gets the first chance to announce it.  Their press release can be found HERE.

It was a friend of mine who found the darned thing.  He is always commendably good about covering up to avoid sunburn but I insisted he take off his hat and stand proud for a photo.  I consider it the best picture I've ever taken on the site. 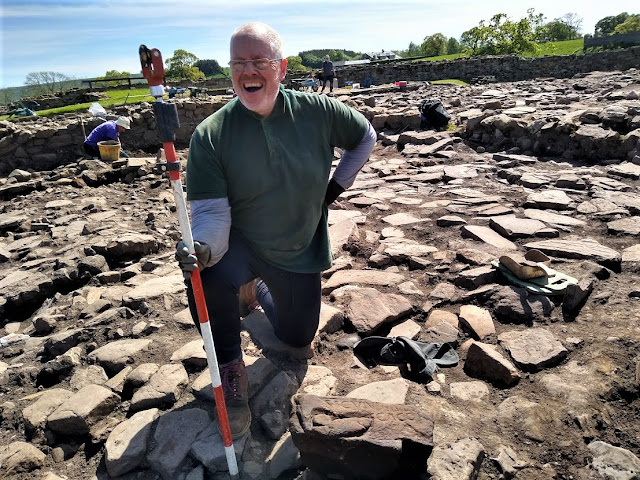 He looks understandably quite happy.  The red and white marker pole is used to sight in the exact location of the find.  It could be my imagination but it appears to be standing a bit taller and prouder than usual.

So, who was SECUNDUS and why did someone write/carve such insulting things about him?  CACOR is not one of those words you learn in Latin class.  It means "excrement".  The word survives to this day in various forms.  "Caca" in Spanish is obvious, and "kack" is a seldom used English variant.  The specific ending here suggests SECUNDUS was "a shitter" if one assumes the person carving it was fully literate.  Phalli are pretty common in Roman art and can have various meanings including Good Luck.  Here it sure seems derogatory.

Alas there are things we will never know.  For instance, who was SECUNDUS?  There have been writing tablets found at the site mentioning individuals with this name but these were decades if not centuries earlier.  And it is a pretty common name in Roman times.  Technically it just means "the second" but it is felt to not indicate a second born child or a "Jr.".  No, it may just indicate someone born in the second month of the year.  This by the way also helps explain the frequency of Tertius, Octavius and variations on months of the Julian calendar, Marcus, Julius, Junius.

The time spent on this carving suggests depth of feeling as well as a lack of concern about being detected.  You probably would not dare to openly insult your Centurion this way.  The most logical explanation would be a grievance between two soldiers of equal rank, perhaps messmates.

Email ThisBlogThis!Share to TwitterShare to FacebookShare to Pinterest
Labels: Archeology, signs of the times

I seem to recall some doggerel from Catalus about "cacata carta".

Have not seen that but it would be in his oeuvre. Dude was all moony over a gal named or nicknamed Lesbia....even in that time it must have been a red flag....