It is still some weeks away, but I have started thinking about my upcoming middle school robotics class.  The budget is as always tight, so I am continually on the lookout for useful cheap stuff.  This regularly brings me to my favorite surplus store, Axman on University Avenue in Saint Paul.  (and several other locations, see their website ).  It is a fun place.

The name Axman came from the source of their merchandise in the early years, mostly businesses that had gone bankrupt.  Calling for "the Axman" to liquidate your stock was literally gallows humor.  The founder of the business had a motto "If you think you might need it, buy it now.  It might not be here tomorrow."  How true, although this usually causes me to end up with extra "stuff".

Off to the cluttered aisles of Axman!
Axman has an unusual feel to it.  You get the impression, quite correct btw, that the extensively tattooed and pierced staff are allowed to decorate the place according to their whims.  Just inside the front door:

﻿I imagine that one of their challenges is trying to move large quantities of weird stuff that has limited appeal.  Their signage encourages creative usages: 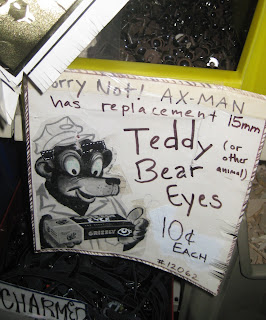 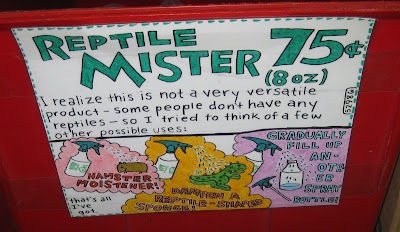 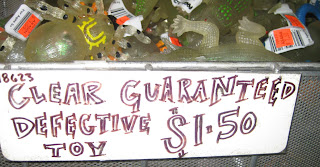 All surplus stores in recent years have featured less military surplus and more odds and ends from failed retail.  But Axman still has some of the old school stuff: 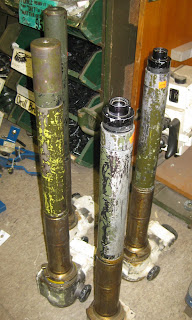 These are tank periscopes, and have been sitting in the same general spot for at least 15 years now!
I eventually made it over to the electronics and motors aisles, and did end up scoring a few things that will see action in the upcoming robotics campaign.  A few other things tempted me, but were on a larger scale than my current project.  For instance: 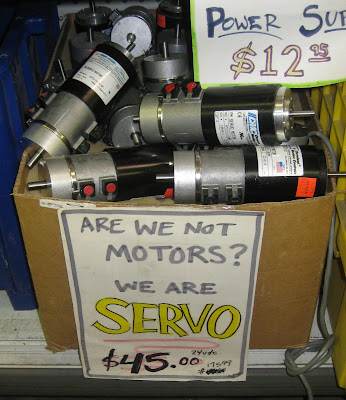 Rock and roll blares continuously over the sound system at the University Avenue Axman (the other locations are more tranquil).  Were this not so I doubt I would have caught on to the above, which is almost certainly the only Devo reference anyone has made in the last decade!
Next time:  Really Weird Axman stuff!
Posted by Tacitus at 1:47 AM

It has been a long time since I've been there. They still have stuff that was there 20 years ago.