The second pilgrimage stop on the Strange Fish road trip was the Mukwonago River.  Oddly this body of water has more fish species than anything like it in the state.  At least 53.  It is also a nice place to fish, the water quality is good despite the high population density in the Milwaukee exurbs.  I started out in a park on the edge of Mukwonago and tossing a nightcrawler into the turbulence below a small dam I quickly had species 16, the Golden Redhorse. 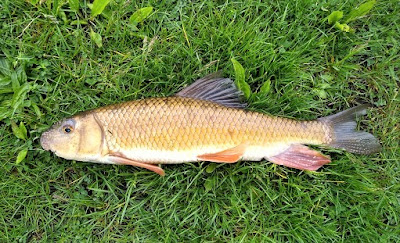 I unprofitably used a bit of time peering into a retaining pond that was connected to the river.  I could see "things" swirling around in the cruddy looking water.  Large, evil things.  But it was fenced off and the No Trespassing signs appeared sincere.  Alas.  Moving back upstream a bit I tossed a bottom line into a sluggish area and when I reeled it in was surprised to find Number 17, which I believe is a Brown Bullhead.  Bullheads have nasty spines so I gingerly dehooked this guy without removing him from the net.  Don't worry about the blood, bull heads are tough.  This guy swam off unperturbed. 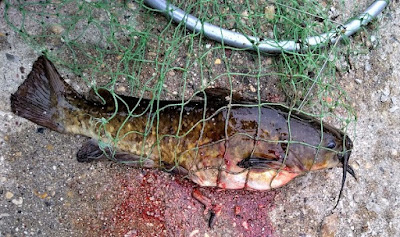 I fished a couple of other places, mostly deep spots down stream of bridges.  Surprisingly I caught a large number of these guys, Rock Bass (18). 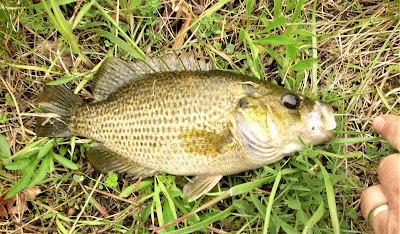 One of the spots I fished was enormous fun, it was hard to keep fish off the lines (you can fish three at a time in Wisconsin but I could only manage one at this place).  Rock Bass, Shiners, Chubs, a Brown Trout, Bluegill, just a little of everything.  It is quite possible that some of the Shiners were new species - some were pretty weird looking - but my photos were not detailed enough to persuade my fish consultant on this point.  I hated to leave the Mukwonago River, it is a lot of fun.  But I had another place to get to, a place with a less happy story.....
Posted by Pachydermis2 at 12:30 AM