When I was in Med School I recall a lecturer discussing genetics.  He mentioned in passing that.."It is a wise man who knows his father."  This was in the context of a discussion on actual versus presumed paternity, and in retrospect was a rather callous thing to say.

But it has a deeper truth to it.  When do we become wise enough to really know our fathers?  Or our children?

Here's my dad and I a couple of years before he passed.  His dementia was getting on a bit but it was not the pure evil that you'd think.  Things that had been eating at him for years were no longer concerns to him.  He thought a lot about his own childhood on the farm and that made him happy.  He got to spend time with his grandchildren and that made him happy as well.

My brother is a rather easy going fellow.  Oddly, when he interacted with our father the discussions were serious ones.  I'm frankly way more intense.  And dad and I had marvelous times in those later years just goofing around.  Here I've got my laptop and am showing him the latest grand kid pix.  Or maybe silly videos.  I imagine my visits made his day.  And maybe my dad also felt better after unburdening himself in discussions with my brother.  I'm sure there is significance in the fact that we both felt more natural interacting with him in the manner least like our own selves.  Each in our own way we got to know him better.  I doubt my dad remembered any of it the next day. 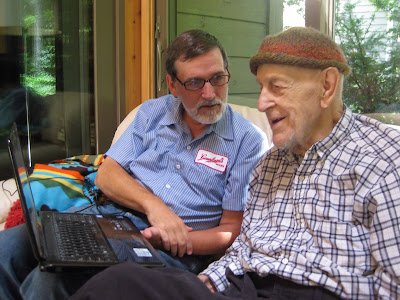 But he's gone now and anyway this is about Father's Day 2021.
It's becoming an outmoded holiday in some respects.  Outmoded in that having a father around is becoming less common.  The last stats I've seen have about 23% of children living in mom only households.  In some subsections of our population it is much higher.  67% of black children are born into single parent families.  That is a statistic, not a judgement.  But its implications for the Black community and the nation as a whole are profound.  We should not shy away from pondering its causes and effects.
Father's Day is also a silly holiday from the perspective of many dads.  Being Dad is a job where you just do what you have to do and don't make a fuss over it.
I think an understanding of who your dad is comes slowly.  Or tragically for some who have an absent father, never at all.  You need to live a certain number of years, see a certain amount of the good things in the world and of the bad to put things into perspective.  I think this is why when we become grandfathers we are almost all easy going.  That B on the report card, those muddy footprints on the kitchen floor, and all the other small to medium aggravations of day to day are seen in a different context.  They don't matter much.  "Hey, let's raid the fridge for snacks!"
I imagine my sons will check in today as is their custom.  The one in the process of moving cross country on a crazy implausible life adventure gets a pass this year.  They are doing well, all of them.  They are quite capable of speaking for themselves so I shan't speak for them.  But I hope they begin to understand.
Dads are not perfect.  Never have been, never will be.  We do what we have to do.  Sometimes it is a thankless job but in its better moments it is simply a job where the thanks are long delayed.  I expect they are all bright enough to not be misled by the illusion of permanence. I'm getting older as they will themselves in their own turn.  I won't be around forever, that's not how things are nor how they should be.  It's been great raising them, even the difficult moments.  I hope we have no unresolved issues, if there are any I think we have time to set things right just as I did with my own dad.
Perhaps it is actually the wise man who knows his children.  I claim no great wisdom but I can say that the small to medium aggravations of raising them no longer matter at all.
"Hey, lets raid the fridge for beers!"

Email ThisBlogThis!Share to TwitterShare to FacebookShare to Pinterest
Labels: Generations