My ancestors back five generations were pioneers out on the Minnesota frontier.  They arrived before the Civil War, actually before Minnesota was even a state.  Stories from that era are few and likely embellished but it is reasonable to assume that they were very self reliant folk.  The nearest town that would amount to anything was 25 miles away.

The other day I was up north and feeling a bit the Pioneer myself as I stacked firewood.  It involved hauling a cart around, tossing split wood here and there.....rather noisy work.  But these gals did not seem concerned in the least. 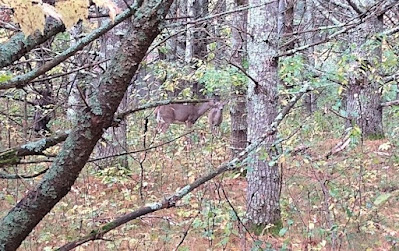 I hit zoom on the camera and walked closer. 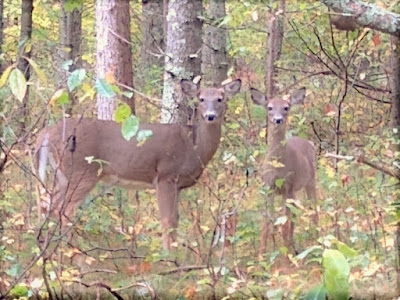 The smaller and presumably younger one had by this point seen enough and literally high tailed it.  The other one just stood there.  I walked closer.  Closer still.  I had to reduce the zoom on the camera back to normal range. This is the point at which the doe decided to saunter off elsewhere.  Actual final range:  six paces.

I have not had a chance yet to sight in the deer rifle.  I'm not sure I'll actually have to.

Email ThisBlogThis!Share to TwitterShare to FacebookShare to Pinterest
Labels: Hunter-Gatherer