Ron Paul versus the pirates

One of the chief responsibilities of our children is to surprise us.

So I was slightly taken aback when one of my sons expressed an interest in joining the armed services.  He seemed particularly interested in having a go at the Somali pirates who have been plaguing shipping lanes off the coast of Africa.

This is a young man of peaceful disposition.  He has never to my knowledge been involved in fisticuffs.  He is squeamish about putting worms on hooks for fishing.  But when I asked him if he would be willing to fire a broadside at a ship full of pirates he said yes without hesitation.

Heck, as a fellow appreciator of the Napoleonic era Hornblower series of books he would likely be ready to clench a dagger in his teeth, unsheathe a cutlass and join a boarding party.

Also in the category of surprising his parents, he has expressed interest in and approval of Ron Paul.  And there might be a connection between these two data points.

The readership of this blog seems to consist in large measure of British archeology buffs and folks from Serbia who enjoy pictures of dogs and squirrels in silly outfits.  As they might not be up to date on American politics, allow me a brief aside for their benefit.

Ron Paul is a Congressman from the Great State of Texas.  Although he does not fit conveniently into either major political party he is running for President as a Republican.  Paul is an unusual political figure.  It is both important and very difficult to listen to his ideas.  Most politicians of our generation say things that are almost 100% meaningless fluff.  Ron Paul's ideas are about 30% genius and 70% nonsense. 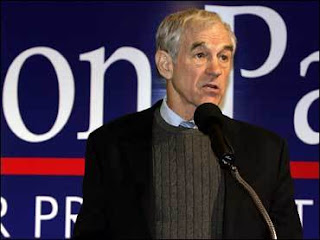 Ron's idea for dealing with Somali pirates?  Bring back the concept of privateers!

This is a very old idea, dating back to the time when navies were expensive and the world a very big and loosely patrolled place.  You just issued a special license, called a Letter of Marque and Reprisal, that authorized a private ship to arm itself and go after a specific enemy.  Often this would be a rival nation, but there is nothing inconsistent with the idea of commissioning private parties to go after pirates.

The British and French commissioned lots of privateers during their endless squabbles of the 17th and 18th centuries.  The American colonies authorized a few during the Revolution, and the authority to issue letters of Marque and Reprisal is specifically given to Congress in the Constitution.

As a business model it was reasonable at the time.  You outfitted a ship with guns and went hunting.  If you captured a suitable enemy vessel there was money to be made, as the cargo and the sale price of the ship proper became "prize money" to be divided among the crew.

Privateering slowly fell out of favor.  It was a little too easy to join the Dark Side and become a pirate when peace inconveniently broke out.  Most sea faring nations-but not the United States-signed an 1856 treaty banning the practice.  There were a few Confederate commerce raiders during the Civil War that operated under Letters of Marque issued from Richmond, then a few third tier South American nations that tried to revive the practice in the 1870s.

Interestingly the awarding of Prize Money lasted a bit longer.  The last Americans to collect any were the boarding party from the USS Omaha which intercepted a German blockade runner in November of 1941.  The US and Germany were technically still at peace, but the German ship was flying false American colors and tried to scuttle herself, so she was considered a legitimate "prize" and the men of the boarding party collected $3000 each.  But only after six years of wartime distraction and peacetime litigation!

So would issuing Letters of Marque work against the Somali pirates?  I think it might.  Congressman Paul is a Texan and knows his constituents.  Given half an excuse I can certainly see a bunch of ex-serviceman "Good Old Boys" pulling an old LST out of mothballs and giving it a try.

I can also see my son signing on.

But I am sure that the 21st century version of privateering would be tamer than that from the Age of Sail.  No doubt the crew of the Alamo Huzzah would include an on board legal counsel, a Health and Safety Officer and a couple of human rights observers.

That would come in handy.  They could play rounds of bridge on whatever deserted island they got marooned on between here and the Indian Ocean!

Ron Paul is very popular among the young 'uns; he got 48 percent of the under 30 vote in the Iowa caucus:

We live in strange times.

Great article, there would need to be an obvious change in the business model, it could be profitable. This would be based on a bounty system.

The biggest problems lay in liabilities. With liabilities comes the apprehensive politician, hence no public support.

As you stated, there are a ton of veterans that still maintain a desire to serve, yet have no desire for 4 year contracts. The would flock to the opportunity like moths to the light.