Ah, Rome.  Once the glittering heart of an empire that ruled most everything worth having.  But if Augustus famously found the city to be made of brick and left it made of marble, the decline and fall of Rome left it little more than a pile of rubble.

When we speak of the Sack of Rome it was actually not a single event.  The Goth's plundered it in 410 AD, mostly carting off gold, silver and other luxury goods such as pepper and silk.  The Vandals had their turn in 455, this time hauling away pretty much everything that could be moved.  The Goths had another go at it in 456 but there was not much worthwhile left by then.

And actually there were later depredations that bear upon today's topic.  The Byzantine Emperor Constans in 663 spent twelve days stripping away any metal he could find including the bronze roof tiles of the Pantheon.  Pope Urban VIII performed a later bit of plunder circa 1600 when he had the bronze ceiling of the Pantheon's portico melted down to make cannon for Castle San Angelo!

All these thefts over time, and one can be certain that there were far many that have escaped the eye of history, pretty much stripped Rome of everything metal.  But remarkably there are still - persisting from ancient times - a few sets of massive bronze doors yet to be seen.

The complex of buildings that is San Giovanni in Laterano has a couple of specimens that I did not, on this trip, have time to see.  The main basilica has a pair of doors that came from the Curia, the building in the Roman Forum where the Senate used to meet.  (Technically these were from a Diocletian era Curia where the Senate was a powerless anachronism).  And the Baptistry has an ancient door that is said to have come from The Baths of Caracalla.

But if you want original Roman doors in their original locations, I think there are only two sites to visit and I got to both of them.  (note that each has a minor "asterisk" next to this claim)

Here we have one of the two double doors to the Pantheon.  Bronze, 20 tons each, they once had a thin coat of gold on them.  These are generally, but not universally, felt to be from the third "Hadrianic" version of the Pantheon, so circa 125 AD.  A dissenting viewpoint is that the current door frame is not the original size, and that these doors are 15th century copies of the originals. 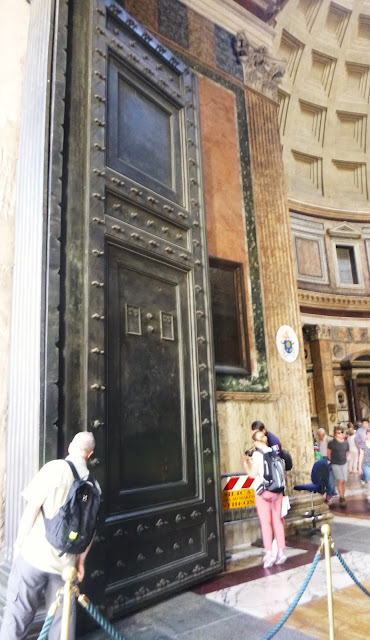 There is something about nice smooth bronze that makes it the most gracefully ageing of all metals! 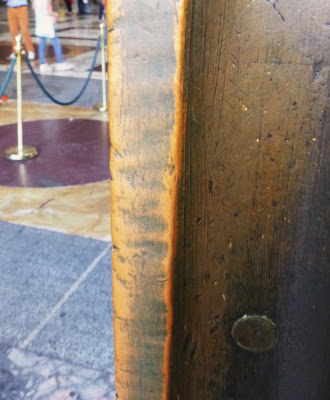 Of course everyone knows about the Pantheon.  To find the other set of "original" and in situ Roman doors we need to go down into the Forum.  Here we have a structure that goes by the common name of The Temple of Divus Romulus.

The identification is pesky on this one.  The Romulus mentioned was the infant son of Maxentius, last of the great Pagan Emperors.  Romulus died in 309 AD.  But the location of this Temple is where a much older structure should be.  This may in fact be the location of the  Temple of Jupiter Stator, which Maxentius might have rebuilt or renovated, then dedicated or rededicated to his lost son. Stator by the way is the personification of Jupiter in his role as He who gives wavering armies strength and courage. Or if you prefer, Stability. The Temple of Jupiter Stator was 8th century BC in its origins, said to have been built by Romulus himself. And Maxentius was very eager to associate himself and his family with the traditional Roman virtues.

The identification of this structure with Romulus, son of Maxentius, is partly based on coin evidence. Here is an example, one of several designs extant.  I like this one.  It has an allegorical eagle ascending to heaven (or whatever the pagans preferred) and even shows the doors of the Temple. 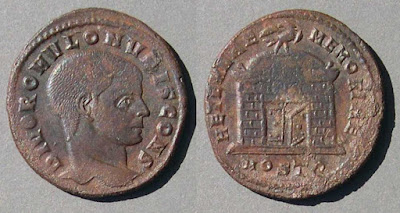 And here is the Temple in 2015.  The pink columns are later additions. 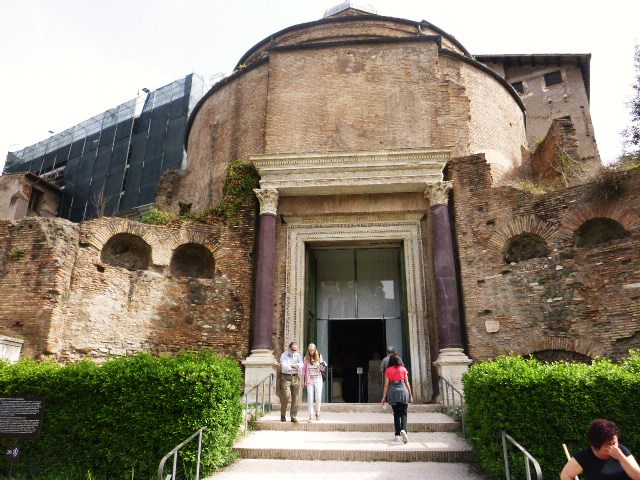 Nice doors, but not as large or fancy as the Pantheon.  They seem to have been installed here after being removed from an unknown building of Severan date, circa 200 AD. 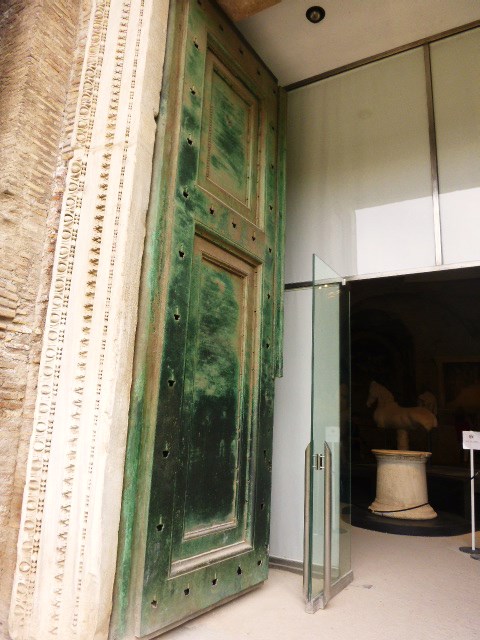 But, if not as posh, these doors have something else that is very special.  The original lock!  Said to still be functional.  I wonder, is this the oldest lock still in use?  I am thinking yes, where in fact could you find an older one?* 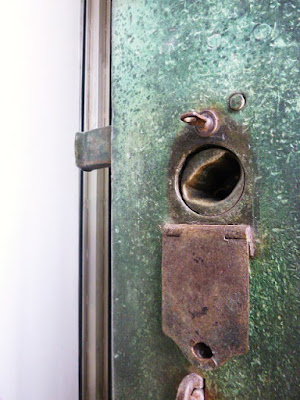 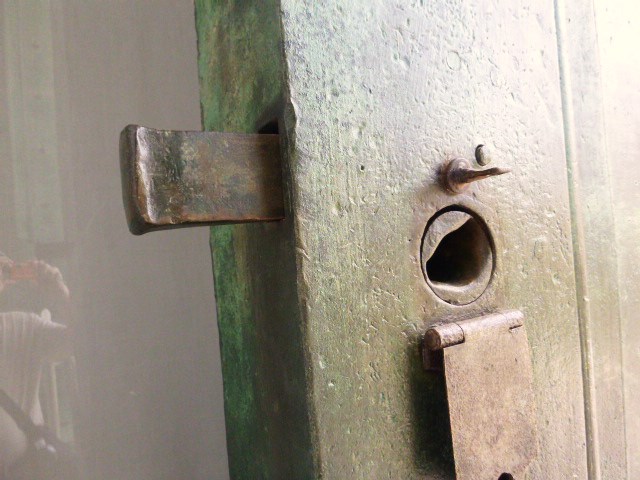 ----------
* maybe on Egyptian grave goods?  They had locks earlier than this,  but I don't think a locked chest or internal door in a tomb quite qualifies as continuous use.