The ancient monument called "Meta Sudans" fooled me.  I assumed when I first heard of it that its name was geographic in origin.  There is of course a country called Sudan, and although the Romans would have called it something else (Nubia? Aetheopia?) it made a certain kind of sense.  Romans were big on geographic bragging, witness the nicknames given to various Imperial worthies...Germanicus, Brittanicus etc.  But in fact the name means something else entirely.  Here is an artist's impression of what the Meta Sudans would have looked like in Imperial times. (image courtesy of Wikimedia, originally by "Claushalls").  In the background is the Arch of Constantine. 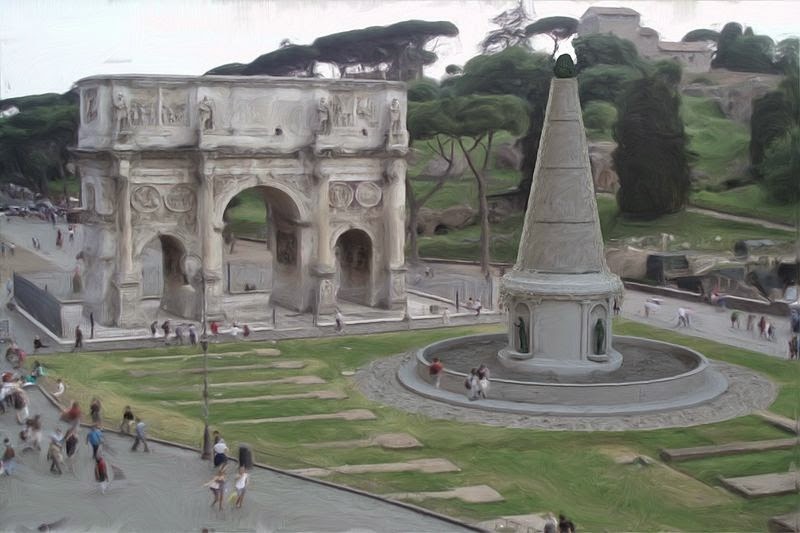 This is probably an accurate depiction, as several similar structures are known from around the Empire including one in Algeria that is more or less intact.

The Meta Sudans dates to the 1st Century AD.  As seen above it was covered in nice marble, all stripped off for other uses after the Fall of Rome.  In this 1858 view, with the Colosseum in the background, it is a sad little thing, just the remnant of the original brick core. 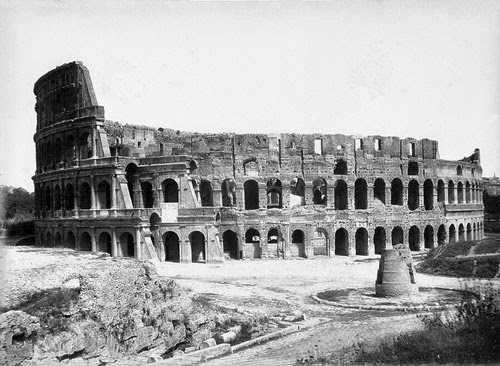 What the name actually meant, and what finally happened to the Meta Sudans are related stories.

In Latin meta means a destination or a turning point.  We keep this sense in a few modern words such as metamorphosis. And sudans, oddly, means sweating.  Literally the Meta Sudans was a "turning point that sweats".  In fact it is felt to have been a fountain but not one that shoots water upwards. The water probably flowed down the sides like a modern day "water feature" used in decor.

The part about it being a turning point is because that is where Roman Triumphs, the victory parades they held from time to time, took a turn.  A meta was also the somewhat pyramidal shaped markers on the "spina" of a Roman circus that indicated a turn.

We tend to regard Mussolini as a B level villain in the history of the 20th century.  He caused a great deal of death and destruction but certainly not in the class of Hitler or Stalin.  But when it came to archaeological misdeeds his legacy is abysmal.  He wanted to have modern day Triumphs in which his showy but ultimately mediocre military could do what they did best, march around in swell uniforms. (By the way, with current international tensions running high the entire vicinity of the Colosseum/Meta Sudans is still under the watchful eyes of well accoutered soldiers of uncertain effectiveness!)

So that military parades could go unimpeded through the Arch of Constantine and make a nice smart turn, he had the remains of the Meta Sudans bulldozed in 1936.  Later revisions of the area have shown the foundations of the monument.

Here are the sad remains of the Meta Sudans in 2015.  Nothing more than a wide circle of stone foundation in a grassy field between the Colosseum and the Arch of Constantine.  I suspect that tens of thousands of people walk past it on an average day, and that you could count on one hand the number of visitors who recognize it. 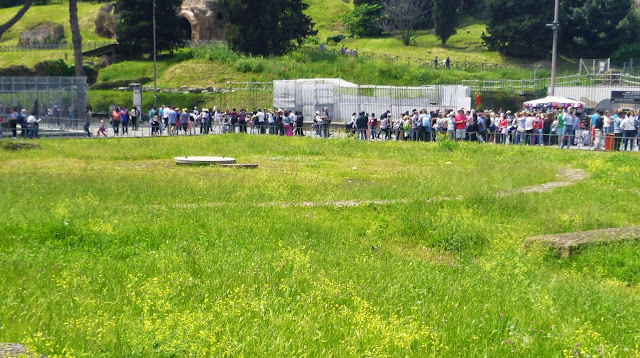 There were actually two other monuments in Rome called "meta".  One still exists. Neither name had any accuracy.

Between Hadrian's tomb and the Circus of Nero (now St. Peter's Square) there was a pyramid shaped structure that was called the Meta Romuli.  Here is a view by Pirro Ligorio from 1561. It appears to show a lot of things that he could not have actually seen by that date, but is a nice representation. Note the depiction of actual metas at the ends of the spina inside the circus. 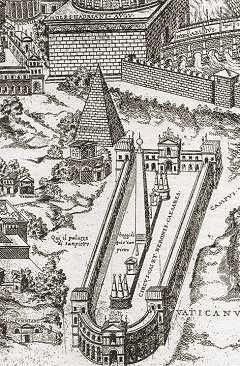 It was probably a tomb.  The notion that Romulus was buried there is of course nonsense.  This structure has vanished without a trace but a quite similar one, the Pyramid of Gaius Cestius was built into the Aurelian Walls and has survived many historic misfortunes in good shape.  The Pyramid of Cestius was sometimes called the Meta Remi, the supposed place where Romulus'brother Remus was interred.  Again with no basis in history whatsoever.

Before leaving the, well, "meta-analysis" of the word Meta, I have to show one final image.  When we visited the marvelous Roman site of Ostia we walked around in the back sections.  We had them pretty much to ourselves, just the ruins, my wife and I, a few fellow eccentrics and lots of lizards. We walked right into a former Roman mill, where donkeys patiently turned millstones grinding grain for the bakeries.  Check this out: 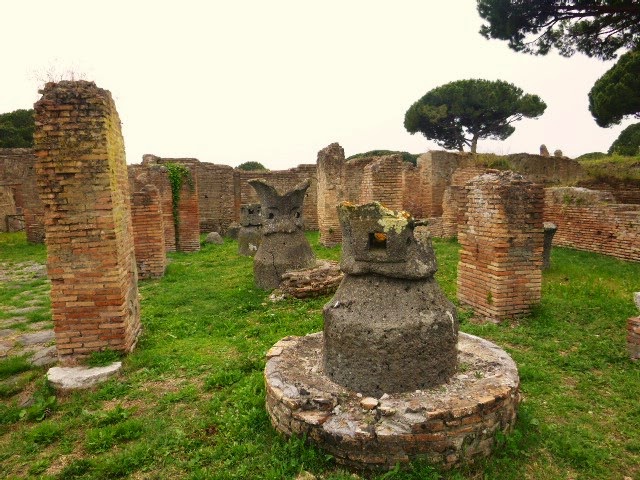 The mills were made of hard volcanic stone, so as to reduce the amount of tooth damaging grit in the daily diet.  The upper part of the mill was an hourglass shaped stone with slots for the handles.  These were then slowly rotated over the lower part of the mill....conical shaped stones called "metas"!
------------
Etymology side note.  The country Sudan gets its name from an Arabic phrase, "Bilad-al-sudan" which means literally "country of the blacks".  Having noted that the Italian word for south is "sud" I had speculated on a Latin origin.  Alas, in Latin south is "australi" the source naturally of Australia! Languages tend to swirl around and imitate each other over time.  Was "sud" a carry over from the Saracen invaders of early medieval Italy?

Nice and quiet when we visited. The site is right next to the main Roman airport but that was closed the day we visited. Rumor has it that some workers were being downsized and to get even they set fire to the ticketing area for the International terminal. Sigh. Ever my lot to be impeded by dark plumes....recalled the Icelandic volcano incident of 6 years ago...
Tacitus